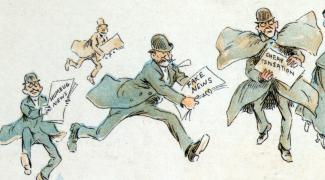 I generally don’t want to bring additional attention to the massive amounts of information people are already bombarded with, which I believe, is generally BAD information when it comes to financial news.  Most importantly, I don’t want to create more anxiety for people.

I don’t think it is any secret that the media sensationalizes, exaggerates and stokes fear to produce clicks.  General news sources like Yahoo, Google, MSN, CNBC, Fox, etc., have really scary headlines because that piques people’s interest.  Littered through those headlines is “paid news” – stories that are really advertisements masquerading as journalism.

The last presidential election cycle should make investors aware that “fake news” is getting posted, re-tweeted and spread through social media mediums in a massive way.  That same thing is happening with financial news.  I think that this disinformation or sensationalized information can lead to bad and impulsive investment decisions.

Why?  We are programmed to look for things that might harm us.  It is survival instinct.  As a result, we are generally biased to assign more credibility to bad news and dismiss positive news.  These are hard-wired mental shortcuts for decision-making, also called heuristics.

The problem is that we tend to sell into weakness and buy rallies when we should be doing just the opposite.

As investment advisors and fiduciaries, we think it is important to have a disciplined process and analysis to drive investment decision-making.  Two important figures in this field of research are Daniel Kahneman and Richard Thaler.

Daniel Kahneman is a Professor of Psychology and Public Affairs at Princeton University.  He is a pioneer in the field of behavioral economics.  He was awarded the Nobel Prize in 2002 for his work challenging the assumption of human rationality in decision-making that prevails in modern economic theory.

Richard Thaler is a Professor of Behavioral Science and Economics at the University of Chicago.  He was awarded the Nobel Prize in 2017 for his work in economic and psychological analyses of individual decision-making.

Kahneman and Thaler’s decades of work has changed financial services, influenced investment advisors and how they work with clients.  We utilize tools like Riskalyze to help clients understand and managed risk, as well as stress test portfolios.  We use Morningstar’s Target Risk Indices to develop investment strategies and long-term planning.  Because investors are bombarded with too much information, most of it sensationalized and designed to stoke fear for clicks, we think unbiased and objective risk management tools can guide investors through periods of uncertainty and volatility and improve outcomes for investors.