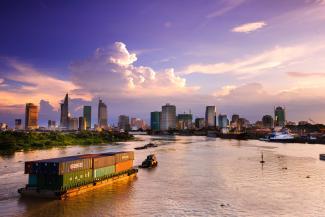 Q3 2018 earnings season is starting up.  2019 earnings look good, but the trade war with China could have a negative impact.  I think when Trump & Co. embarked on this trade war with China, they thought it would be easy to win and China would come to the table because their biggest and best customer was asking for a better deal.  Well, it appears China won’t be rolling over any time soon.

The problem with the trade war is it can and will most likely hurt profits based on the current trajectory.  Goldman Sachs put together some estimates based on assumptions of further escalation if Trump or China don’t work out some deal.  This could mean a -10% or more drop in stocks, and a few hundred billion or more in profits of U.S. corporations vaporized.  Not necessarily a recession, but another “profit recession” like 2014 – 2015 which was a period of poor returns for investors.

There is no question that China has not always been the best trade partner.  But nobody is forced to buy goods from China or manufacture anything in China.   As some critics argue, Trump is living in a mercantilist world where we protect our certain industries with political influence (steel, coal, timber) by making Chinese products more expensive.  But that is not how the global economy works anymore.  Companies like Nike and Apple have high paying design and marketing jobs in the U.S., and outsource low wage, cyclical manufacturing jobs.  Nike and Apple can fire these suppliers at any time and move their business to Vietnam, Thailand, Malaysia or India, places where wages are even lower.  We are in a much better position than China in terms of how the global economy presently works.

The most likely outcome if China does not come to the table is that manufacturing will move to Vietnam, Thailand, Malaysia, India, Indonesia in order to avoid tariffs.  Trump & Co. will slap more tariffs on these countries?  Protectionism is not the answer, and if our leaders are not careful, they could rock the apple cart.

The benefit global outsourcing is U.S. consumers can buy stuff cheaper.  The downside is that textiles, furniture and small electronics manufacturing jobs have moved offshore.  Instead of moving to find work, retraining, becoming more competitive, the displaced worker is bitter.  They get stuck in low paying service jobs at places like Walmart and JOANN’s that stuff their shelves with Chinese made goods.  Trump & Co. think that tariffs on Chinese goods will bring these jobs back, or at least they use that rhetoric in speeches that allude to this.

The problem with protectionism is that rewards complacency and stifles innovation.  We tell this story to Brazil, India, Argentina, Greece, Spain, Venezuela and many other nation’s that are backwards and protectionist.  Arguably and ironically, over the course of 2 or 3 decades, U.S. corporations will find China their biggest customer, if not already.  Remember, Chinese people like U.S. brands.  U.S. companies want to be in China.  Are Trump’s trade policies and actions really helping us to be more competitive in the long-term?