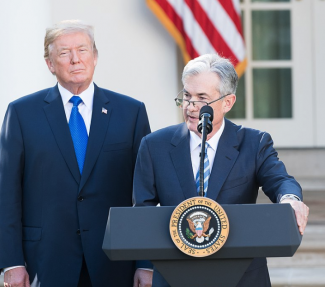 Hyperinflation & Independence of the Central Bank

President Trump may be correct for suggesting the Fed raised rates too high and too fast.  By design, the central bank, the Fed, is supposed be insulated from political pressures.  Of course, politicians in power want a hot economy and low rates.  The old saying is that the Fed’s job is to “take the punch bowl just as the party gets started.”

Many years ago, it was decided to resurrect the central bank after it was killed by a populist president named Andrew Jackson.  For nearly seven decades banking was literally the wild wild west until after the Panic of 1907.  It took another six years of debate and in 1913 the Federal Reserve Act was passed.

It was only a few years ago that tight money hawks like the Tea Party and other Republicans were arguing the Fed had kept rates too low for too long.  But that was when Obama was President.  For me, I did believe that the Fed needed to raise interests and get off what is called the “zero-bound”.  In Japan and Europe, many government bonds have negative yields.

I would much rather be in the position we are in instead of dealing with negative interest rates.  Some would argue that the Fed now has some ammunition to fight any economic slowdown by lowering rates and hopefully will not have to resort to more quantitative easing (QE) where we end up in a negative interest rate scenario.

Trump cannot support a gold standard and quantitative easing (QE) at the same time.  These are polar opposites.  One is tight money and the other is literally creating money out of thin air.  But I have heard him say he wants to do both.  We are not in a recession, maybe not even headed into a recession, but I would argue that politics, not the Fed, should be our biggest worry.

GDP growth was just under 3% last year and will probably finish this year between 2% and 2.5%.  This is about half of what President Trump has been saying was achievable based on Trumponomics, and he is blaming the shortfall on the Fed for raising rates too fast and too high.  I think there is some validity in that grievance, but that is Monday morning quarterbacking the Fed in my opinion.

I would argue that if he did not engage in the trade wars, especially with tariffs leading to retaliatory tariffs and the disruption of supply chains, the Fed probably would have been on the right track.  In hindsight, it looks like they may have been a little too aggressive in their quest to get “back to normal”.  However, the Fed cannot make policy based on anticipated trade policy that is literally changing week to week, day to day.

Pretty much everybody at the Fed has been critical of tariffs.  I have a feeling that nobody at the Whitehouse calls the Fed for advice on trade.  Trump has actually criticized them for not asking him about his policies.  If the economy slows, they make interest rate cuts.  But you cannot expect an apolitical government entity to make monetary policy based on the wishes and demands of politicians.  Why?  Because it undermines the value of our currency.  The hyperinflation of the late 1960s and 1970s is the lesson of why the Fed needs to steer clear of politics.

Hyperinflation had its origins with Kennedy who didn’t want to raise taxes.  Johnson wanted more social programs, bigger government and ramped up the Vietnam war, but didn’t raise taxes.  Johnson is known to have physically intimidated the Fed chairman at his Texas ranch to keep him from raising interest rates.  Nixon came along, nominated a new Fed Chairman, pressured him to lower interest rates and expand the money supply.  He tried to raise taxes after his election in 1968 but Congress rejected the proposal.

In 1971, Nixon would end the gold standard.  He was told by his Treasury Secretary that we would run out of our gold stock at the rate foreigners were converting dollars to gold.  By 1973 inflation was 10% and would peak at 16% in 1980.  The double dip recessions of 1980 to 1982 were the worst recessions since the Great Depression, until the most recent recession from 2007 to 2009.  Many people have said, and essentially all of them of the Republican persuasion -- "You cannot devalue your way to prosperity."  Sound money, fiscally responsible -- that is the way to get it done.  Printing more money is not the answer to our economic woes, in my humble estimation.​

“Some weak-dollar advocates believe that American workers will eventually get cheap enough in foreign-currency terms to win manufacturing jobs back. In practice, however, capital outflows overwhelm the trade flows, causing more job losses than cheap real wages create. This was the lesson of the British malaise, the Carter malaise, the Mexican malaise of the 1990s, Yeltsin's Russian malaise through 1999 and the rest. No countries have devalued their way into prosperity.”

“The more the dollar devalued against the yen in the 1970s and '80s, the more Japan gained share in valued-added manufacturing, using the capital from weak-currency countries to increase productivity. China is doing the same now.”

“By showing that an orderly return to a gold standard is possible, Cain joins Lewis Lehrman, noted financier, monetary authority, and author of The True Gold Standard, in debunking those who claim there is no escape from the paper dollar status quo.”

“… I have little debt, but I will tell you this, Joe, at some point if rates ever go up to a more natural level, you know, these are the lowest rates in history, and if rates go up, we have $20 trillion, you know, and we doubled it under Obama, doubled it.”

“Now, she’s keeping them artificially low to get Obama retired.  Watch what is going to happen afterwards.  It is a very serious problem.  And I think it is very political.  I think she is very political and to a certain extent, I think she should be very ashamed of herself.”

“It’s staying at zero because she’s obviously political and doing what Obama wants her to do and I know that’s not supposed to be the way it is, because that’s why it is low, and as soon as they go up the stock market will go way down, and don’t forget I called Brexit and did a lot of calling and what they are doing is, I believe, it’s a false market.”

The only problem our economy has is the Fed.  They don’t have a feel for the Market, they don’t understand necessary Trade Wars or Strong Dollars or even Democrat Shutdowns over Borders. The Fed is like a powerful golfer who can’t score because he has no touch - he can’t putt!

If the Fed had done its job properly, which it has not, the Stock Market would have been up 5,000 to 10,000 additional points, and GDP would have been well over 4% instead of 3%.

My friend Herman Cain, a truly wonderful man, has asked me not to nominate him for a seat on the Federal Reserve Board. I will respect his wishes. Herman is a great American who truly loves our Country!

China is adding great stimulus to its economy while at the same time keeping interest rates low. Our Federal Reserve has incessantly lifted interest rates, even though inflation is very low, and instituted a very big dose of quantitative tightening. We have the potential to go up like a rocket if we did some lowering of rates, like one point, and some quantitative easing. Yes, we are doing very well at 3.2% GDP, but with our wonderfully low inflation, we could be setting major records &, at the same time, make our National Debt start to look small!

China will be pumping money into their system and probably reducing interest rates, as always, in order to make up for the business they are, and will be, losing. If the Federal Reserve ever did a “match,” it would be game over, we win! In any event, China wants a deal!

I am pleased to announce that it is my intention to nominate Judy Shelton, Ph. D., U.S. Executive Dir, European Bank of Reconstruction & Development to be on the board of the Federal Reserve....

Q2 GDP Up 2.1% Not bad considering we have the very heavy weight of the Federal Reserve anchor wrapped around our neck. Almost no inflation. USA is set to Zoom!

China is not our problem, though Hong Kong is not helping. Our problem is with the Fed. Raised too much & too fast. Now too slow to cut....

..Spread is way too much as other countries say THANK YOU to clueless Jay Powell and the Federal Reserve. Germany, and many others, are playing the game! CRAZY INVERTED YIELD CURVE! We should easily be reaping big Rewards & Gains, but the Fed is holding us back. We will Win!

Germany sells 30 year bonds offering negative yields. Germany competes with the USA. Our Federal Reserve does not allow us to do what we must do. They put us at a disadvantage against our competition. Strong Dollar, No Inflation! They move like quicksand. Fight or go home!

…My only question is, who is our bigger enemy, Jay Powell or Chairman Xi?