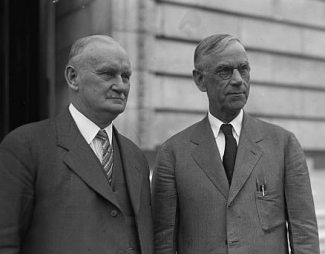 It's the economy stupid

James Carville was the lead strategist of the Presidential campaign for Bill Clinton when he defeated G. H.W. Bush in 1992.  His slogan – It’s the economy stupid – is frequently used today to described why a weak an economy can be detrimental to any presidential bid.  Ironically, Carville is married to a political consultant who worked for G. H. W. Bush on his campaign.  They have a rule, so it is said, that they never discuss politics.

The first theme became the de-factor slogan of the Clinton campaign, much like Trump’s “Make American Great Again”.  Carville felt that the recession (Q3 ‘90 – Q1 ’91) would be Bush’s greatest weakness, and many political strategists believe that Carville was largely correct.  Clinton did win.

In my view, I think that for Trump to be successful in a 2nd presidential election bid, he will need a healthy economy.  Historically, trade wars / tariffs have been, based on historical analysis, economic losers for all participants.

The Smoot-Hawley tariffs of 1930 are widely considered one of the causes of the Great Depression, among many other bad decisions by political leaders.  A petition was signed in 1930 by over 1,000 leading economists not to enact the tariffs.  Henry Ford spent an evening at the White House telling President Hoover to veto the bill.  J.P. Morgan’s top man, Thomas Lamont, paraphrasing – “nearly went down on his knees to beg Hoover to veto the asinine tariffs…”

Willis Hawley and Reed Smoot, pictured above in 1929, largely get credit for exacerbating the impact of the Great Depression.  Their successful pursuit of tariffs in 1929, which was also the top of the stock market for three decades, preceded the Great Depression of the 1930s.  The Smoot-Hawley Tariff Act became law in 1930.  Tariffs have long been considered “bad policy”. 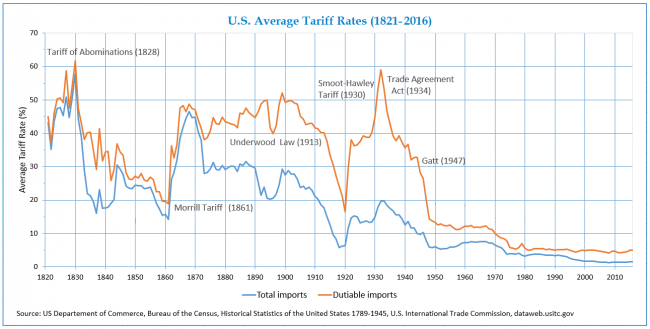 I know that I have clients on both sides of the political spectrum.  I do not pretend to understand political science, but I do have a good education in economics and finance, as well as three decades working in these industries.  I do think I have special insight into our financial markets and how the ups and downs affect the average investor.  We went through it together.

In general, both parties blame the Fed, Wall Street and our trading partners for our economic struggles.  I suggest, in my humble estimation, and I cannot prove it, that maybe politics and politicians in the U.S. on both sides are making things more difficult for Americans because they cannot come to any compromise on positive policies that would make us more competitive.

As far as I am concerned, tariffs will not achieve a long-term positive outcome.  I have written many things explaining that protectionism, of which tariffs are a primary tool in that kind of economic policy, have generally not produced positive economic outcomes.

Hopefully, the Trump administration can work out deals with our trading partners that unleash positive economic outcomes.   At the same time, I am very nervous that the policies of the current administration will decrease trade, create trade disruptions and force U.S. corporations to make decisions in terms of investments, production and trade, that will reduce profits in the short-term, and perhaps the longer term.  This could be potentially bad for investment returns which is what you pay us to think about.

In the long-term, what the Trump administration is asking for would be great for Americans.  Unfortunately, our trade partners do not see it as we see it.  Even if we don’t think it, we are among the richest countries in the world.  Even if a large amount of American’s are struggling to participate in the economic success of our nation, the other countries we negotiate with probably don’t care about them.  These countries have they their own problems.

I watched a good movie lately called Bridge of Spies starring Tom Hanks.  The story that Spielberg, Hanks and Joel and Ethan Cohen tell us, is about a complex relationship between the U.S., East Germany and the Soviet Union.  I don’t know how “accurate” this story is.  It is a movie.  I don’t treat movies as fact.  Movies are entertainment.  The crux of this story is that relationships between countries is very complex.